Czech performances at the Prague Quadrennial: Extraterrestrials, a Spartakiad, and an unusual travel agency 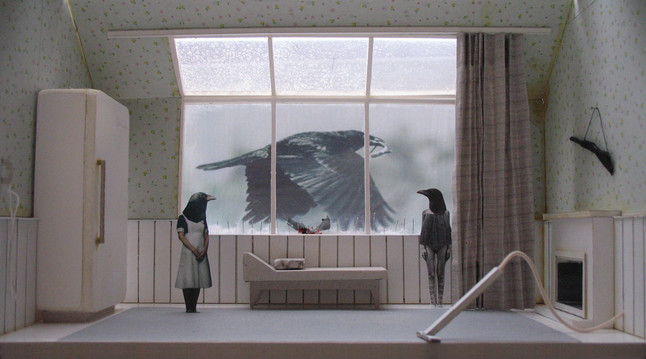 From 6 to 16 June at the Prague Exhibition Grounds, the Prague Quadrennial of Performance Design and Space presents exhibitions, projects, and performances from 79 countries, and the Czech Republic is a strong part of it all. On Štvanice Island, as part of the festival’s main competition section, the Exhibition of Countries and Regions, the Czech Republic presents the co-production CAMPQ, which transports visitors into a camp for newly arrived extraterrestrials. Meanwhile, students from Brno’s JAMU will attempt, through a fictitious travel agency, to convince audiences that “Prague Is Not Czechia.” Also on the program are an unusual Spartakiad from the performance group tYhle, a short film about the unique multifunctional DOX+, and an homage to an outstanding representative of Czech scenography, the late Iva Němcová.

Representing the Czech Republic at the Exhibition of Countries and
Regions: The extraterrestrial CAMPQ

As part of a co-production between Tygra v tísni, Divadlo LETÍ, and the South Bohemian Theatre, a container city is being built in the vicinity of Villa Štvanice – a camp for alien refugees from distant planets. Besides an interactive exhibition, the project also includes a seven-hour immersive performance that opens the doors to alien worlds. Visitors will meet the mysterious Phoenix Women, survivors of the technically advanced planet Zeyris, and the animal-like Attas, who continue to worship their queen on Earth. “The combination of exhibition with performance is a response to the pressing question of how to construct scenography and present the performance space. A megalomaniacal outdoor stage and alien costumes are combined with a one-of-a-kind experience into which visitors can immerse themselves day and night,” says curator Ivo Kristián Kubák. The refugee camp for extraterrestrials was created by nine scenographers and costume designers, four directors, and nearly 70 actors. The visit to CAMPQ begins at the Prague Exhibition Grounds, where all the other national exhibitions are on display as well. From here, a special bus will take the audience to Štvanice Island. The scenographic design at the Prague Exhibition Grounds is by Kamila Polívková and Antonín Šilar. If you want to attend one of the three all-night performances (6, 8, or 10 June), you must purchase tickets in advance at www.campq.cz.

Also representing the Czech Republic at this year’s PQ is the Intelektrurálně collective with its project Prague Is Not Czechia. This exhibition by students from the Janáček Academy of Performing Arts explores the centralization of cultural identity and artistic production and the loss of nationwide context. In this spirit, they take visitors on six trips beyond the city’s boundaries. “We came up with six categories representing specific aspects of national identity – culture, nature, mythology, our relationship to work and society, etc. But the specific sites were chosen by the artists themselves, who also put together the program for each outing,” states the collective. Also contributing to planning and organizing the various trips were students from DAMU’s Department of Alternative and Puppet Theatre, who put together a trip to the Brdy Forests titled Going Mushrooming. Students from the Intermedia Studio at Brno’s Faculty of Fine Arts will take participants to the very limits of reality, while a group of students from JAMU’s Theatre Faculty presents the mythical Czech figure of the water sprite and the project’s curators themselves have put together an outing titled No Cake without Hard Work. Also involved in the project is the artistic- anthropological group Czechia, which will take participants on a trip to Ústí nad Labem designed by artist and theater director Michal Pěchouček. Tickets for the various trips must be purchased online at www.prahanenicesko.cz or during PQ at the “Prague Is not Czechia” stand at the Prague Exhibition Grounds.

The exhibition Fragments at the Prague Exhibition Grounds’ Lapidarium celebrates artistic creations that capture the essence of a particular place and time. Each participating country has chosen a single artifact, a pioneering or cult work of art from the field of stage, costume, lighting, or sound design created by a legendary representative of those fields. The exhibition’s curators have chosen to represent Czech art through Iva Němcová, a stage and costume designer and conceptual artist who in her life created some thirty performance designs at home and abroad. Leading Czech directors who often invited her to work with them include Daniel Špinar, Jan Frič, and Miroslav Krobot. Němcová also worked as an architect on several leading Czech films, including Gottland and Family Film, among others.

The unusual concept behind the DOX+ theater space

Through a series of short video documentaries, the Performance Space Exhibition presents the broad spectrum of possibilities from the world of performance architecture, from found or reshaped spaces all the way to national projects or temporary outdoor installations. As part of this competition section, the Czech Republic presents one of the competition’s winning projects, the multifunctional DOX+ (designed by Petr Hájek Architekti), which was created during the most recent expansion of the DOX Centre for Contemporary Art. DOX+’s spatial and acoustic variability opens up new possibilities for multi-genre programming with an emphasis on developing new forms of art.

On Tuesday, 11 June at the Prague Exhibition Grounds, the awards for the Prague Quadrennial 2019 were presented to this year's winners. The international jury awarded the Golden Triga for best exposition to the Republic of North Macedonia and their project This Building Truly Talks. The jury voted in a wide range of...

An unconventional symphony created by the movement of pigeons in flight, giant fish wandering the streets of Prague, a geolocational sound walk, a wall made of a thousand bricks, a silent carneval procession, new-circus acrobats, and fake lines of waiting people. These are just a few of the many projects found in...