Too soon Too Late 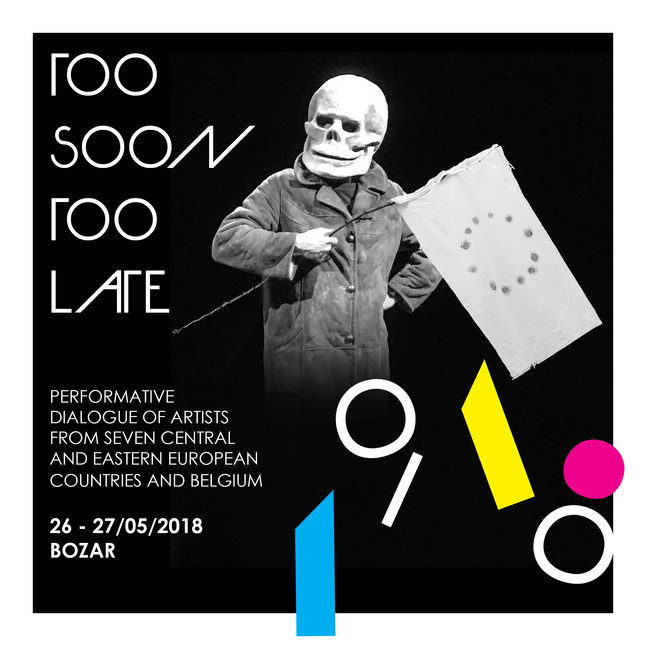 ‘And now we welcome the new year, full of things that have never been.‘ Rainer Maria Rilke

This on site performance exhibition ‘Too Soon Too Late‘ is part of the programme ‘1918, European Dreams of Modernity – 100 Years On‘, organised in 2018 by Czech Centre Brussels and BOZAR in cooperation with cultural institutions and representatives and local partners in the Czech Republic, Slovakia, Poland, Hungary, Austria, Romania, and Lithuania.

This project co-produced by artists from seven Central and East European countries and from Belgium is coordinated by the Arts and Theatre Institute and a team of Czech artists and technicians. The project is supported under the International Visegrad Fund’s grant programme and it premiered in Brussels on 26–27 May 2018.

In the history of Central and Eastern Europe the year 1918 is primarily associated with the collapse of the empire and the formation of new nation-states. After the First World War and the disintegration of the Russian, Habsburg, and Ottoman empires nine new states appeared on Europe’s political map: Austria, Hungary, the Kingdom of Serbs, Croats and Slovenes, Czechoslovakia, Poland, Lithuania, Latvia, Estonia, and Finland. Remembering the historical events of 1918 in Central and Eastern Europe can serve as a way of explaining a shared experience that is not entirely well-known in Western Europe. And the year 1918 was about more than the more of these new nation-states, as even today it still symbolises the longing of many European for a better future and for everything the modern era has to offer. The period after the declaration of independence was a time of important political and social changes throughout the region, as a democracy was built, the limits of mass politics and communication were tested, and the idea of the welfare state put into practice, processes accompanied by an unprecedented migration of the population from the countryside to the city, and unique experiments in the arts, science, and technology, which even today remain an inspiration for people around the world. The disintegrating world order made it possible for women, immigrants, disabled people, and previously disadvantaged citizens to claim new roles in society. These ambitions were reflected in the arts, which flourished to an unprecedented extent in the new states. What have we taken away from that time? What does the avant-garde signify today? And what role does historical memory play in the arts today?

The creation of the on-site performance exhibition ‘Too Soon Too Late’ was preceded by a dialogue that was organised between artists from the Czech Republic, Slovakia, Hungary, Poland, Lithuania, Austria, Romania, and Belgium initiated by Czech Centre in Brussels in cooperation with the Arts and Theatre Institute in Prague. These discussions touched on the past, the present, and the future of Europe and the European arts. The resulting exhibition is a reflection of the changes that occurred during this century in the ‘new Europe’ and the legacy of the avant-garde for now a third generation. Major artists were invited from each of the participating countries to take part in this dialogue and to contribute original approaches and various perspectives to this project. Visitors will be able to walk freely through the exhibition and watch the dancing, performances, and video installations that will repeat in a continuous loop every 90 minutes. Visitors will also have the opportunity to choose how many of these performances to watch and pick their own route through the installation.

The Czech Centre Brussels is a Czech cultural institution based in Brussels. Its mission is to actively promote Czech culture in Belgium and ties between the Czech and Belgian cultural scenes. The centre’s programme comprises films, plays, concerts, exhibitions, conferences, and dance and more.

The Arts and Theatre Institute (ATI) is a state contributory organisation founded by the Ministry of Culture of the Czech Republic. The mission of the Arts and Theatre Institute is to provide the public in the Czech Republic and abroad with comprehensive services in the field of the theatre and individual services in the arts (music, literature, dance, and the visual arts). The ATI collects, processes, and facilitates access to objects and works relating to the theatre. It conducts research, initiates and participates in international projects, and produces publications and literature in its field. The ATI’s International Cooperation Department coordinates the programme for the Promotion of Czech Theatre Abroad, the primary aim of which is to promote Czech culture and especially theatre and the peforming arts abroad and to provide the Czech public with information about theatre on the international scene. To this end the department develops concepts for and performs dramaturgical and production work connected to the preparation and implementation of international and domestic projects, festivals, seminars, conferences, and other activities. It collaborates with many Czech and international theatre and arts organisations, institutions, and universities. It is an active member of international networks and international theatre NGOs. It provides information on Czech theatre and personal contacts to the international community and vice versa. It produces publications and informational materials on Czech theatre for international readers and participates in the work of publishing and distributing the ATI’s publications.

As the oldest and largest centre for the arts in Belgium, BOZAR Centre for Fine Arts is committed to serving as a model arts and culture centre for the 21st century. BOZAR hosts events in a dynamic concert and exhibition space that also serves as a multifunctional space. This core artistic mission serves as the foundation for developing inspiring platforms for sociocultural development. Each year 1200 events are organised under the BOZAR label, including 20 exhibitions, 300 concerts, film screenings, theatre performances, literary evenings, debates, lectures, shows, and educational activities. BOZAR has 340 permanent employees and each year it invites cooperation from a further 200 artistic partners. BOZAR is thus a driving force in international arts projects, which strengthens ties between regions inside and outside Europe.

The project was supported under the grant programme of the International Visegrad Fund.

More information can be obtained from the project website here. Information about the performance exhibition Too Soon Too Late (including a description of individual sections of the exhibition) is available in English online at the PerformCzech website.