Call for Papers - The Days After 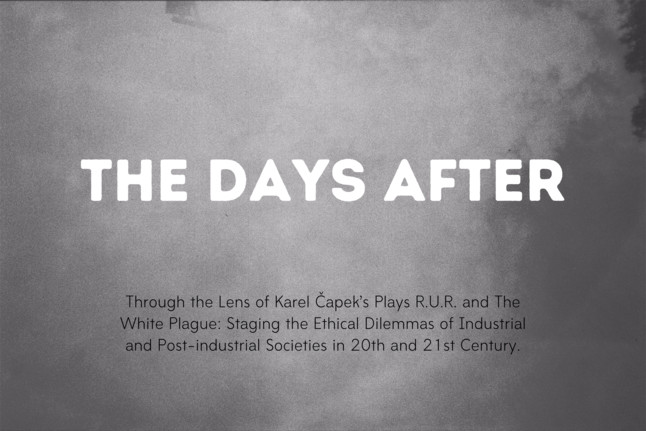 Through the Lens of Karel Čapek’s Plays R.U.R. and The White Plague: Staging the Ethical Dilemmas of Industrial and Post-industrial Societies in 20th and 21st Century. Online conference will take place on 26-27 January 2021, you can send your papers until 30 November 2020.

25 January 2021 will mark the 100th anniversary R.U.R.’s premiere at the National Theatre in Prague. Written in 1920 by Czech writer, dramatist and journalist Karel Čapek as a comedy, the play coined the word “robot”, which, along with its title, gained worldwide notoriety in the following years. The play marked the emergence of a thread of science-fiction themes in the Čapek’s novels and plays, while his drama The White Plague has taken on a special urgency in connection with the current SARS-CoV-2 pandemic. Both plays warn of the ethical and existential dilemmas of modern civilisation in the form of global threats linked to the negative effects of machines and technology, totalitarianism, armaments and/or pandemics. On one hand, artificial intelligence has become commonplace, a helpful part of our everyday lives that can even compose music and paint pictures, while, on the other, it raises ethical dilemmas and concerns as strong as those articulated 100 years ago.

For the 100th anniversary of the premiere of R.U.R. at the National Theatre in Prague, the Arts and Theatre Institute will host an online conference devoted to the staging traditions of Čapek’s works dealing with the ethical problems of modern civilisations. The conference will focus on two distinct thematic areas. The first will be devoted to staging traditions of R.U.R. and The White Plague in the Czech Republic/Czechoslovakia and abroad. The second will open a space for insights into civilisational dilemmas related to the themes of Čapek’s plays R.U.R. and The White Plague in the context of contemporary theatre and society.

The conference will also include the presentation of the results of the PQ STUDIO: Common Design Project, completed this year by the Prague Quadrennial of Performance Design and Space in collaboration with ATI (more information here).

The conference will take place on 26-27 January 2021 on the Zoom platform and will be held in English. The organisers plan to publish the conference proceedings.

Contributions of a maximum of 15 minutes (including any extracts) may respond to the following thematic areas:

1. The staging traditions of Karel Čapek’s plays R.U.R. and The White Plague in the Czech Republic/Czechoslovakia and abroad: dramaturgical and directorial interpretations / scenographic and costume design / critical reflections

2. The ethical and existential dilemmas of industrial and post-industrial societies in contemporary theatre related to the themes of Karel Čapek’s R.U.R. and The White Plague

3. Artificial intelligence in the theatre: a blind alley, or the future of the field?

Abstracts (1800 characters maximum) may be written in Czech or English and will be accepted until 30.11.2020 via this form.

The Society of the Brothers Čapek

Silesian University in Opava / Cultural Dramaturgy with a Focus on Theatre

The monograph Václav Chochola has been published

The Arts and Theatre Institute has published the first book of the chamber monograph series Czech Theatre Photography that features Václav Chochola’s works.

It is still not clear when culture will be able to get back to normal operation. Thus, we would like to help share information about the current state of culture and art in the special newsletter. You will find an overview of extraordinary measures, calls and grants, activities in professional associations, and...